If you were born in June, the enchanting and glowing pearl is your birthstone.

The pearl, like a lady of old — pure and fair to look upon, is the emblem of modesty and purity.

Pearls rank among the most popular gems in the world. With a serene beauty, they make perfect complements to flashier gems. Yet, they also possess an elegance that can shine alone. They are a  timeless wardrobe staple, beloved by wearers of all ages.

Pearls have long been associated with purity, humility and innocence. As such, pearls were traditionally given as a wedding gift.

Pearls are special because they are the only gemstone formed within a living creature. Natural pearls form when the mollusc secretes a substance called nacre around an irritant such as a piece of sand or a parasite that has invaded its shell.

Since natural pearls are rare and difficult to recover from the ocean’s depths, humans invented the technique of culturing salt and freshwater pearls from molluscs carefully seeded with irritants similar to those produced by nature.

Cultured pearls come in many beautiful colors, ranging from pale cream and white to rose, lilac, green, gold, gray and black and  account for the vast majority of pearl sales today. There are four main types of cultured pearls — Akoya, South Sea, Tahitian and Freshwater — each with unique qualities that separates it from the others.

Tears of the gods

Throughout human history, our ancestors have admired and worshipped pearls. Pearls were considered “tears of the gods” in Persian mythology, while ancient Chinese legend claimed the moon held the power to create pearls, instilling them with its celestial glow and mystery.

In Western cultures, the pearl has astrological associations with the planet Venus. Like pearls, the goddess of love came from the sea.

The June birthstone was also thought to be beneficial for health. In ancient Sanskrit text, pearls were said to bestow long life and prosperity. In Asia, pearls were believed to soothe indigestion and haemorrhages. Some 19th century Arab physicians maintained that pearl powder improved eyesight, quieted nervous tremors and eased depression.

Natural pearls have been found in the Arabian Gulf (Persian Gulf) for at least 5,000 years. Divers have been recovering the June birthstone from the Red Sea since 300 BCE. The Strait of Mannar has been providing natural pearls since 2000 BCE. Starting in the 16th century, during Spanish colonial rule, large quantities of pearls were recovered from the waters off Mexico, Central America and what is now Venezuela. Only small quantities of pearls are found in any of these areas today.

One of the most famous natural pearls is the 50.56 carat (ct) La Peregrina. About the size of a pigeon’s egg, the drop shaped pearl was discovered in the 1500s in the Gulf of Panama. It became a prized possession of European royalty. Richard Burton eventually gifted it to Elizabeth Taylor in 1969; Christie’s New York auctioned the Cartier necklace containing La Peregrina for $11.8 million in 2011. 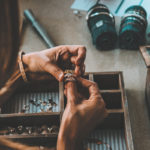